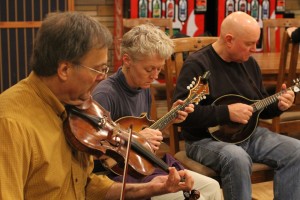 Great article from Eyes on WV on the Morgantown Oldtime Music and dance scene!

“Every Tuesday evening, West Virginia University’s Percival Hall rings with the sounds of Appalachian tunes as Morgantown’s local musicians bring their instruments and circle up to play old-time music. The fiddle players often lead the tunes, but musicians come with banjos, guitars and other stringed instruments and some of them play more than one.

Though the exact date isn’t recorded, the Percival Jam was created during the late 1970s by a professor at WVU and has been mostly maintained with consistent membership to this day. The jam typically sees anywhere from eight to fifteen participants, and new players and listeners are always welcome.

Percival Hall is just one venue where old-time music is celebrated in Morgantown. Old-time is a form of acoustic music, played with stringed instruments and often accompanied by square dancing, contra dancing, clogging, or flatfoot dancing”